On July 8 1947, the Roswell Daily Record newspaper reported that the US Air Force at Roswell Army Air Field (RAAF) had captured a flying saucer.

This was in response to a press release issued by the RAAF on that day:

The many rumors regarding the flying disc became a reality yesterday when the intelligence office of the 509th Bomb group of the Eighth Air Force, Roswell Army Air Field, was fortunate enough to gain possession of a disc through the cooperation of one of the local ranchers and the sheriff’s office of Chaves County.

The flying object landed on a ranch near Roswell sometime last week. Not having phone facilities, the rancher stored the disc until such time as he was able to contact the sheriff’s office, who in turn notified Maj. Jesse A. Marcel of the 509th Bomb Group Intelligence Office.

Action was immediately taken and the disc was picked up at the rancher’s home. It was inspected at the Roswell Army Air Field and subsequently loaned by Major Marcel to higher headquarters

The RAAF issued another press release the next day stating that it was a weather balloon.  It was reported in the Roswell Daily Record as follows:

The balloon which held it up, if that was how it worked, must have been 12 feet [3.5 m] long, [Brazel] felt, measuring the distance by the size of the room in which he sat. The rubber was smoky gray in color and scattered over an area about 200 yards [180 m] in diameter.

There was no sign of any metal in the area which might have been used for an engine, and no sign of any propellers of any kind, although at least one paper fin had been glued onto some of the tinfoil.

There were no words to be found anywhere on the instrument, although there were letters on some of the parts. Considerable Scotch tape and some tape with flowers printed upon it had been used in the construction.

No strings or wires were to be found but there were some eyelets in the paper to indicate that some sort of attachment may have been used.

An FBO Memo written in 1950 shows the FBI record of a witness who informed the FBI. 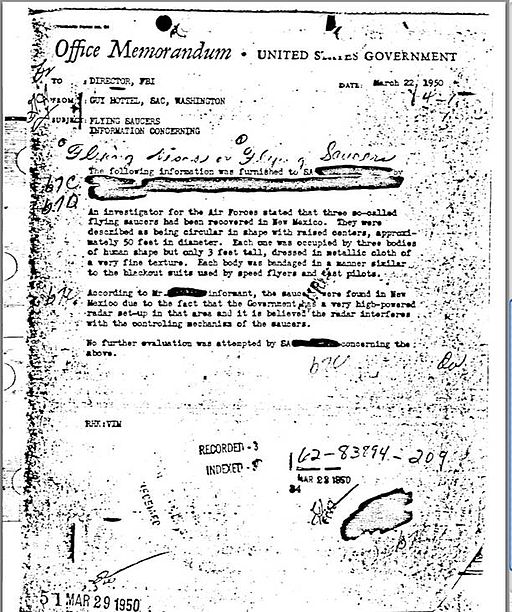 There have been claims by many witnesses regarding alien sightings and the flying saucers.  Many conspiracy theories have arisen from this event.  One of the most people theories is that aliens (dead or alive) were taken to the US Air Force facility at Groom Lake (Area 51) and that alien technology has been reverse engineered from the crashed vehicle.

In the 1990s, the US Military wrote two reports “revealing” that the crashed object was actually a top secret nuclear test surveillance balloon (Project Mogul).

US Congressman Bill Richardson attempted to obtain further information but was refused as the information was classified.

Theories on the Roswell crash continue to be proposed to this day.